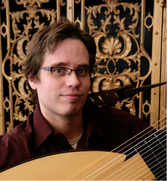 Dr. Jason Priset is on the faculty for Montclair State University and Amherst Summer Early Music Festival.  Internationally, Jason has performed in concerts in Spain, Taiwan, and the United Kingdom. Locally, he has performed at Cathedral of St. John the Divine and at Lincoln Center's Alice Tully Hall in Manhattan. Jason holds a Doctor of Musical Arts (D.M.A.) from Stony Brook University and a post Doctorate degree from Escola Superior de Música de Catalunya (ESMUC) in Barcelona, Spain, and specializes in historical guitars and lute. ​

Sandy Meltzer  has had an exceptional career as a French Horn player, teacher, guitarist, and conductor.  She is recently retired from teaching/conducting at Dwight Morrow High School in Englewood, where she directed every music group on campus as well as an award-winning A Cappella group and directed the annual school musical.

She earned both her Bachelor’s and Master’s degrees at The Manhattan School of Music and taught in the pre-college division for twelve years. She was an active freelancer in the New York area performing in many accomplished groups and theater companies.  She was also a featured orchestral solost.